Early spring is a favorite time for me in Pennsylvania with the arrivals of “first blooms”, “feathered friends”  and warmer temperatures beginning to curtail winters chill and that “slippery white stuff” that falls from the sky on what seemed a never-ending plight.  I’m still very much a Texan, and  after more than 25 years in the Mid-Atlantic States, winter still takes its toll on my being.  I do love the gentleness of freshly falling snow and perhaps best while I’m vacationing in the mountains and I can enjoy watching others deal with the labor of shoveling and plowing, while I sit sipping hot cocoa in warm surroundings.

The change of season awakens my anticipation and interest in one of my favorite yearly pilgrimages with visits to a 50 acre “woodland wildflower wonderland” within a steep ravine along the eastern shoreline of Pennsylvania’s Susquehanna River.  This wildflower wonderland I speak of is known as the Shenk’s Ferry Wildflower Preserve in southern Lancaster County. Mid April brings a blanket of white and blue to this ravine along a small stream with the white being “Trillium A Plenty” dominating the scene along with swaths of blue from thousands of Virginia Bluebells forming the patchwork from a distant view.  As you enter and explore the area and further explore the forest floor closely, one can find a host of shapes and colors from the many different species that bless the preserve on a yearly basis.

Photographing wildflowers has become somewhat of an obsession over the past few years, especially since my formal introduction to this joy by a fellow photographer and dear friend Elmer Schweitzer who has been mentioned with loyal affection in some of my prior writings and hopefully will bless many more in the future.  Elmer celebrated his 90th birthday this past May and is still as spry as the day I first met him.  “If he could just remember his hearing aid batteries on occasion”… We sort of have a mutual understanding that if I teach him about birds,  he in return opens up the wonders of wildflowers.  “Oh to one day share his knowledge of these colorful and lovely things.” 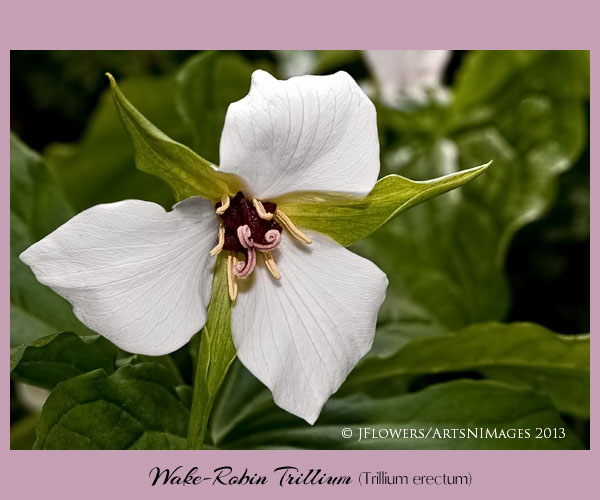 Elmer and I differ in our shooting styles with the camera, in that he prefers the use of a tripod and natural light with longer exposures whereas I prefer to hand-hold the camera and use the flash to lightly fill in the shadows or as a main light to control the density or darkness of the background and better isolate my subject.  The flash also acts as a “sort of tripod” in that the quick pulse of light (faster than the camera’s shutter) will freeze the subject at the hint of a slight breeze and movement.  It also adds a touch of warmth in color,  especially to photographs taken in the shade to suppress the “blues.” Both methods reflect an individual preference and yield beautiful and colorful photographs.  One of the most important findings I have discovered with wildflower photography or anything that requires critical focus is to avoid using the auto-focus capabilities of your camera or lens and focus manually and carefully adjust the lens aperture to control the desired “depth of field.” (Area in and out of focus) 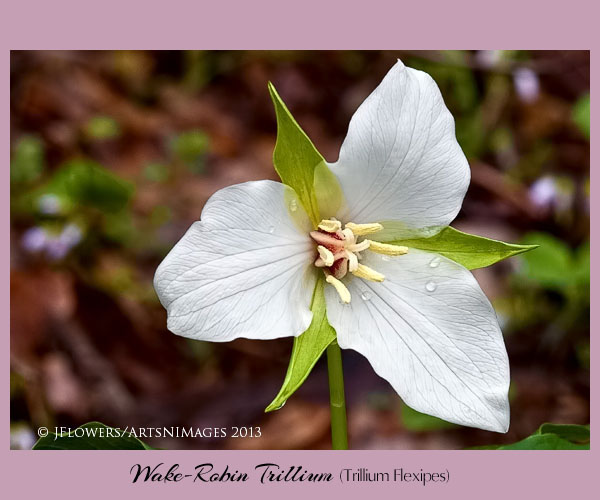 I enjoy the freedom from the lack of a tripod with the ability to explore many angles of view and composition with out the cumbersome and time-consuming efforts of moving shifting and recomposing required by the tripod.  He constantly teases me about lying in tick infested grass or poison ivy.  So far I have been lucky without a single tick and physically I have a somewhat mild reaction to any poisonous plants. “Knock on Wood…..”

I do use a tripod on occasion for taller floral subjects but getting “up close and personal” in a “down and dirty” way is half the fun of wildflower photography.  I’m just a big kid in a sandbox full of plants with a camera in hand. 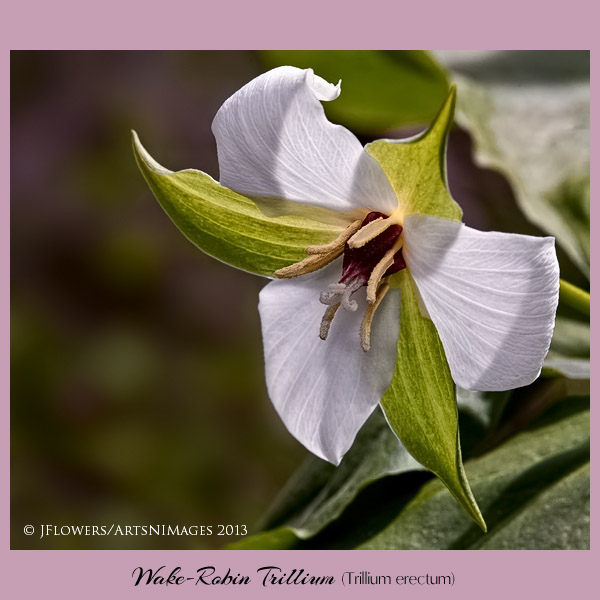 Shenk’s Ferry is home to two primary species of Trillium to include Trillium Erectum Variation Album known by the common names Red trillium, Stinking-Benjamin, Wakerobin or Purple trillium; with considerable color variation across its extensive range.  A member of the Liliaceae (Lily Family),  this is one of the most common eastern Trillium.  Its foul smell attracts carrion flies that act as pollinators.  The second, Trillium Flexipes is known as Nodding Wakerobin, Bent Trillium or Drooping Trillium and can be found in dappled shade areas of the forest floor. I find the two difficult to tell apart at times.  The Trillium seem to be the main draw of most visitors to the preserve but once on the trail the massive variety of blooms from many species of wildflowers will attract the attention of even the most serious Trillium devote.

Most of these can be enjoyed from a gentle and mostly level trail through the area that is accommodating to children, seniors and even “out of shape” portly gentlemen such as me. The main foot trail follows the small stream Grubb Run for a mile of its total length with a few spurs that lead into different areas of the preserve.  Carefully leaving the trail and exploring the stream banks can itself be a rewarding experience; but tread lightly and be forever vigilant of where you step so not to damage any of the wildflowers along your path.

Footing to the stream bank can be treacherous and only those physically fit and with moderate hiking experience should attempt this.  The stream banks are rocky in places with slippery soil in others so caution and common sense should be used.  A few of the notables that can be found along or near the stream banks include the Jack-in-the-Pulpit, Trout Lily, Spring Beauty and Round-lobed Hepatica in variable colors pictured below. 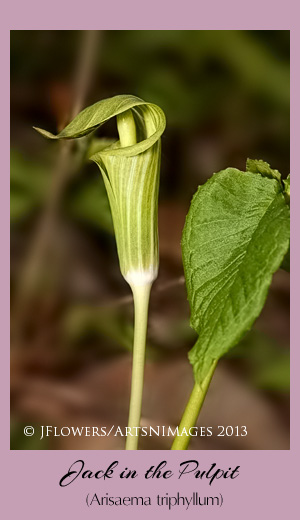 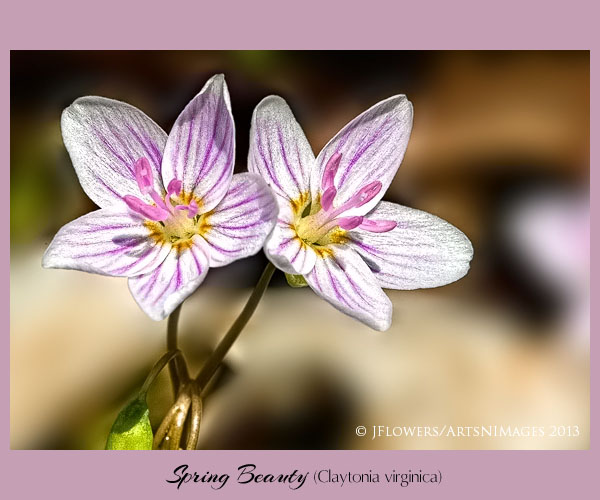 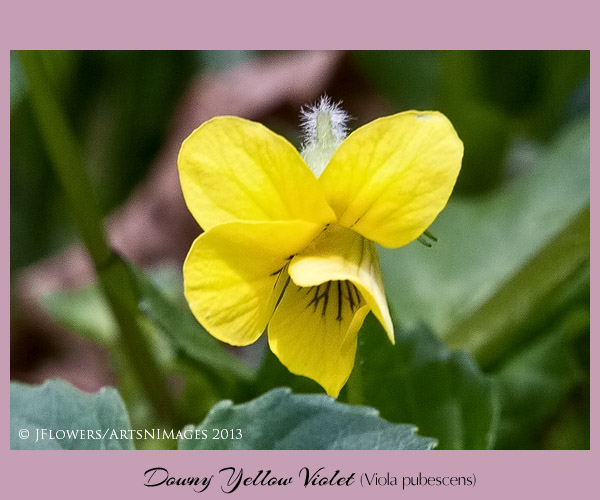 In my introduction I mentioned a “blanket of white and blue” and the Virginia bluebell is another dominate species in the early spring along with the Trillium creating this blanket. Although quite common throughout the Mid Atlantic States and others;  and along many streams and wet areas,  the bluebell is always a popular draw to the preserve and deserves no lesser mention than some of the other favored species.  I have always been totally amazed at the perfection that Mother Nature devotes to her children and the bluebell is a perfect example of it.

Another contributor to the “blues” of the blanket is the Wild Sweet William or Wild Blue phlox which is also quite common throughout the area and in a variety of colors and shades. Other names of this species are Louisiana phlox, Blue woodland phlox and just Sweet William. A notable mention is that this species is most common in the woodlands and fields of the mid-western states.  The mature plants in the eastern part of the range have notched petals;  those in the western do not.

Two of my favorite tiny species from the woodland floor are very easy to overlook and quite often tromped on by unsuspecting hikers taking shortcuts though the woods. It’s no surprise either as they are quite small and easily missed without ones eyes glued to the ground. They have a habit of hiding among the leaves from the past fall and gently push their way to the light of the sun through the lingering fall cover. They are the Dwarf Ginseng and the Virginia pennywort pictured below. I truly have to thank Elmer for pointing these out as I surely would have been one of the guilty “trompers”. 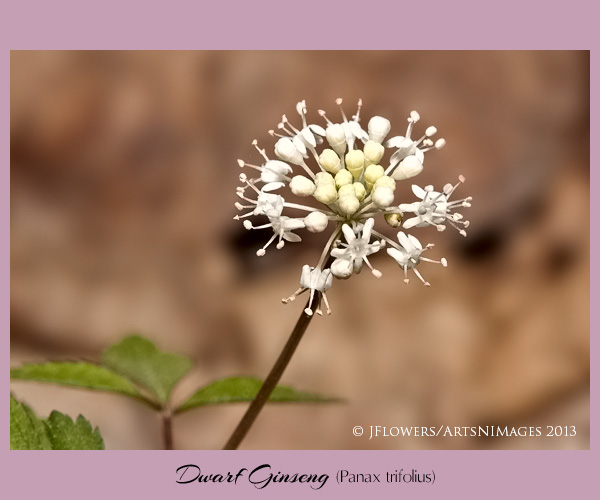 Last but not least I have three other favorites that rate right up there with the Trillium and the foot trail is not a necessity for their observation.  As a matter of a fact,  these little gems can be found near the parking area and the road in along the rock walls.  If your into the “odd” as far as petal shape is concerned, these are “your cup of tea”.  They include the Eastern Red Columbine,  Squirrel Corn and the Dutchman ’s breeches and are pictured below.  Both Squirrel Corn and the Dutchman ’s breeches can be found along the foot trail as well. 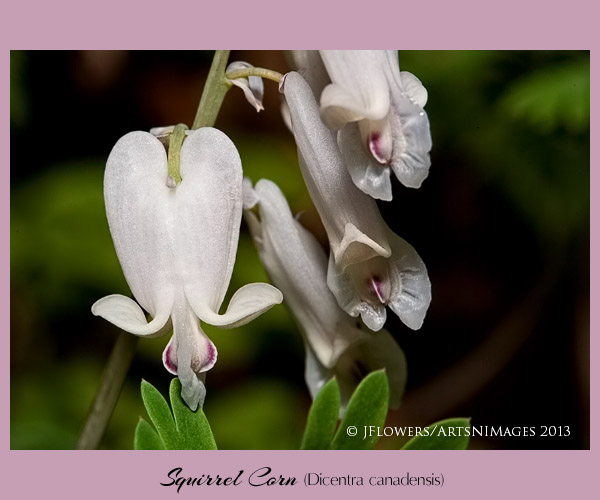 As mentioned above,  I only visited the area twice for the early spring blooms this year.  The first trip included friends and fellow photographers Eric Gerber and Elmer Schweitzer, who I cannot leave behind as I need to constantly pick his brain for the wealth of information on wildflower species.  The second trip was with my wife Connie for a few more photographs and a walk of leisure.  Both were clear chilly mornings with a lovely warming sun as the day progressed.  It was really neat to see some of the species with buds or closed blooms and on the return to the trail-head and the perking area,  find them fully open enjoying the nourishment of the light.  This has been a rather cool and wet spring and the blooms were a touch late.  However in the past few years we had been a little late with our visits.  Use April the 15th as a guide point,  but pay attention to the weather and seasonal changes.  The majority of the images were from the two 2013 trips,  however a few were from last year.

During your visit stop at the Trail-head Kiosk to pick-up or study any literature available for information about the preserve and a list of wildflower species.

You will find a partial list of wildflower species and and a brief history of the area in the brochure along with directions to the preserve… Below is a Map of the area:

I want to wish all a wonderful summer, Good Birding and fun wildflower exploration…….Jim Flowers