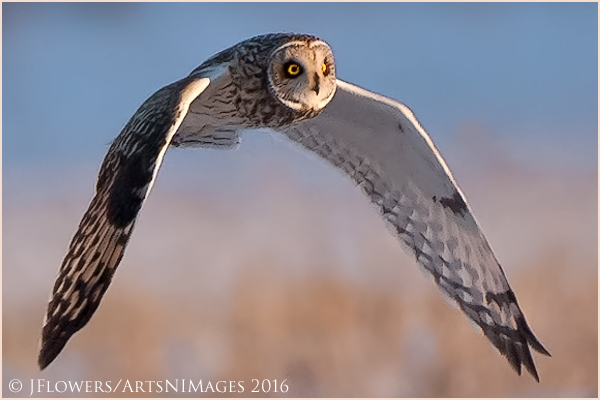 The world of “Avian Photography” is filled with discovery,  wonder and intrigue presenting a “never ending” learning environment as well as a sense of accomplishment after successfully pursuing and photographically capturing your subject…

Step one begins with research and careful study of your subject’s biology,  preferred habitat, seasonal movements and daily habits;  hunting, feeding, etc…  Once you accomplish the preceding,  it’s time to start looking!  Although sometimes quite fickle,  finding owls is not a difficult chore.  Most are quite habitat oriented during select seasons or year round.  Some are migratory and some are not. 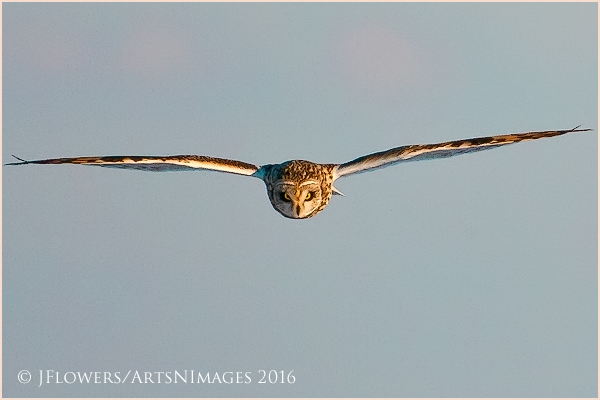 Above, with an intense stare, a short-eared owl patrols the winter grasslands of Adams County, Pennsylvania in search of prey.

The Short- eared Owl,  Asio flammeus,  is a creature of our “open spaces”;  including the prairie,  meadows,  tundra,  moorlands,  marshes,  savanna, and scattered woodlands sharing the fore mentioned.  Short eared owls can be found on every continent except Australia and Antarctica.

Drawing a line from the southern border of New York state and tracing it west would mark the southern edge of their breeding range,  however the Short- eared Owl is also one of a few species that seems to have benefited from strip-mining.  It will occasionally nest on reclaimed and replanted mines south of its normal breeding range.  Northern populations are believed to be highly migratory and nomadic;  recently showing an increase of the owls at the edge and farther south of their normal breeding range especially during the winter months. 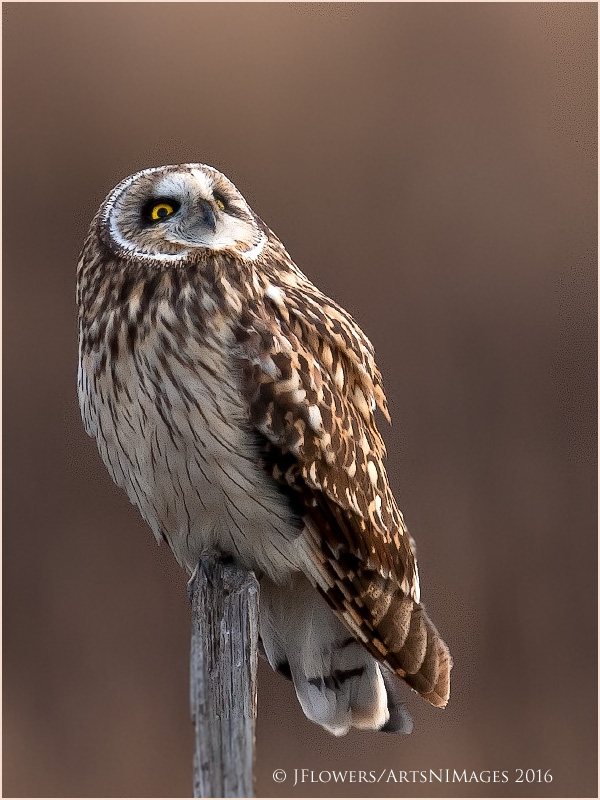 Finding the Short- eared Owl in the Mid-Atlantic region is again a task of locating suitable habitat along with applying a lot of patience while exploring each location.  A lot of grief can be avoided by searching the local birding “List Serves” and/or using e-Bird’s vast mapping and sighting resources for recent sightings.  But, even with all of the available information, sighting and photographing these birds can be “hit or miss” at your selected locations. 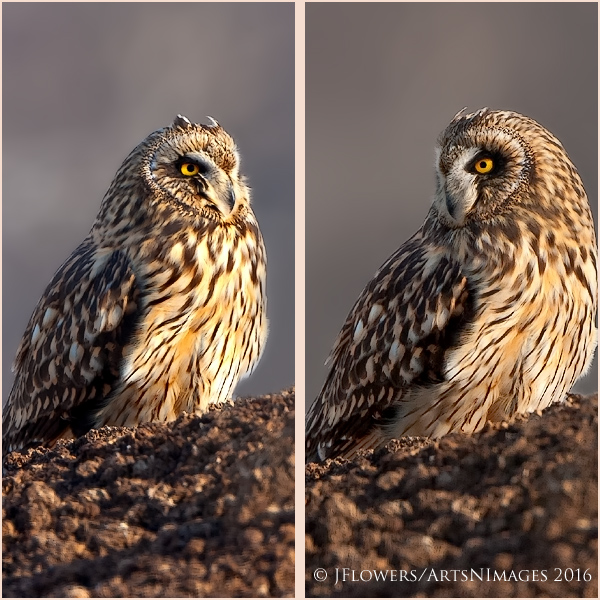 King of the Hill”….Variations on a Pose…

A Pennsylvania short-ear enjoys an elevated perch to keep an eye out for dinner.

You can spend hours watching for one to take flight and still not see an owl.   As a photographer,  things become even more critical, especially the available light and its angle. The optimum time of day to spot the short-eared owl is during the late afternoon hours until dusk, or an hour before sunrise and perhaps a couple of hours afterwards.  However,  it’s not unusual to see this species during the daylight hours “on the wing” over and hunting the grasslands and marshes.  As I have learned over the years past,  this normally nocturnal or early/late hunter may choose to perform his activities far earlier in the day and rest quietly during the normal feeding window.

Owl and raptor photography has somewhat become a “main-stay” for me during the winter months while my other feathered friends are on hiatus in the tropics.  While I like to photograph wintering waterfowl as well,  I normally always end my day with an owl outing during the final hours of daylight; and many times joining my good friend Larry Hitchens on Maryland’s Eastern Shore and what he calls his “Lower-Slower” Dorchester County.  Larry’s knowledge of reputable locations,  as well as the habits of these birds has been immensely helpful in my success with the short-ear and other owl species. 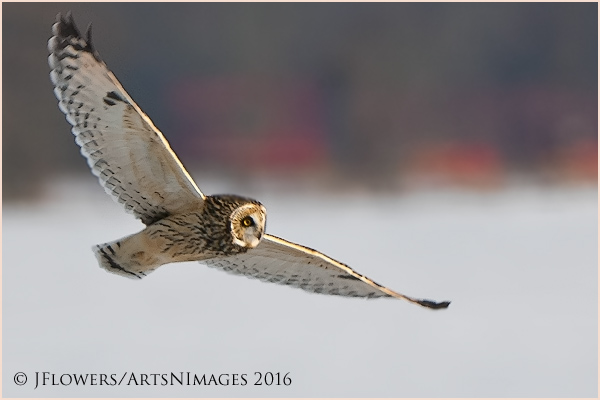 A short-ear patrols the Adams County grasslands in south-central Pennsylvania.

I will make an effort here to share a few notable locations to begin your short- ear experience. These areas normally see this species on a yearly basis,  but it is still wise to use the links I provided above before heading out.  I also noted that much of a successful outing can be “hit or miss” and almost based on the “luck of the draw” so frustration can be common place. 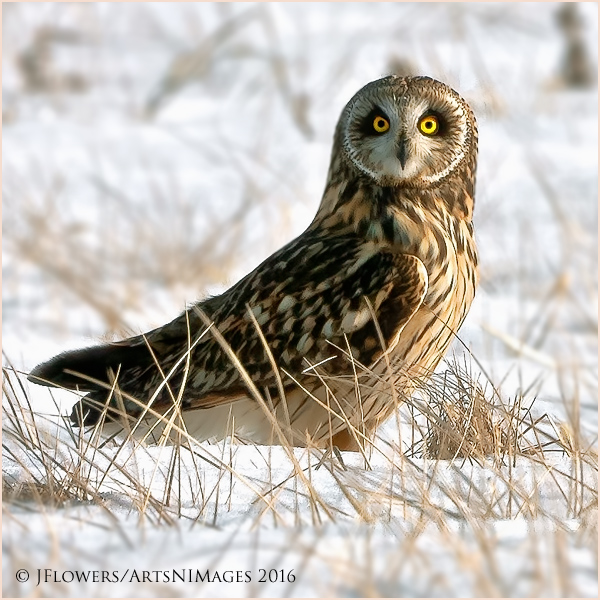 I will begin close to our home near Gettysburg Pennsylvania and travel south from the Freedom Township Grasslands (which I will cover shortly) along Bullfrog Road into Maryland’s Carroll County to the road’s end at Baumgardner Road.  The field to the east,  just before Baumgardner is productive year after year it seems and we enjoyed a pair of “shorties” there just this past weekend.  A previous report sighted 3 at that location along with a pair of Northern Harriers and other raptors…… Map via Google 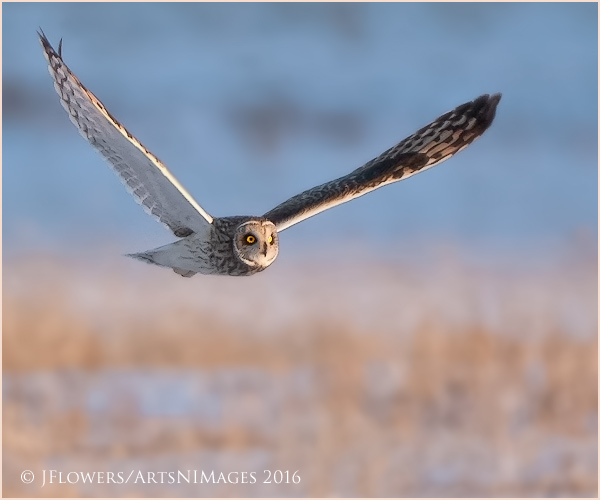 Freedom Township Grasslands…Traveling west from Business Route US 15 on Millerstown Road, through the Battlefield and after Millerstown becomes Pumping Station Road just past West Confederate Ave, and continuing will take you through the heart of the Freedom Township Grasslands to the intersection of Bullfrog Road previously mentioned.  This road will also take you to the historic and “hallowed” Sachs Covered Bridge which is well worth a visit before waiting for the Short-ears to fly. All of the “flight” and snow images were captured in this area…. Map via Google 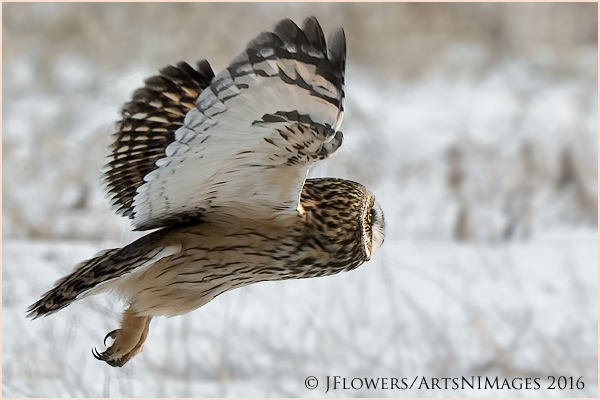 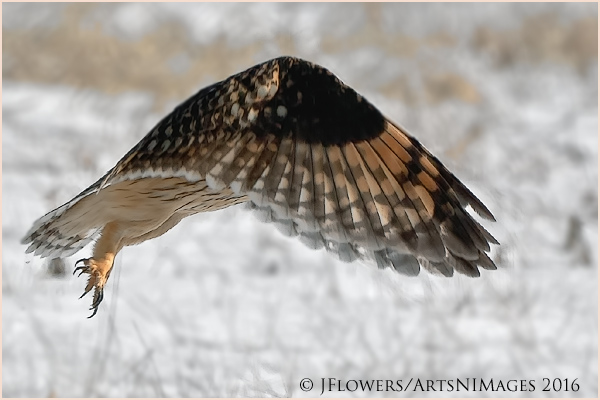 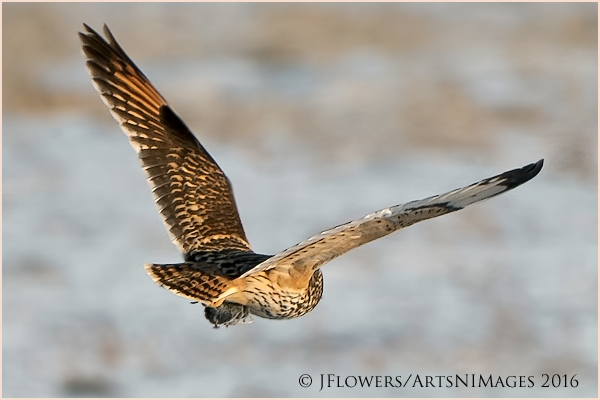 On the “negative side”,  last winter we found 7 short-eared owls in the field on the left just before the intersection of Pumping Station and Bullfrog Roads.  However,  this spring brought the plowing under of most of that field and the planting of corn which certainly will not benefit the owls and the other grassland species.  “What was once supposed to be preserved”,  is now falling victim to estate development and farming. 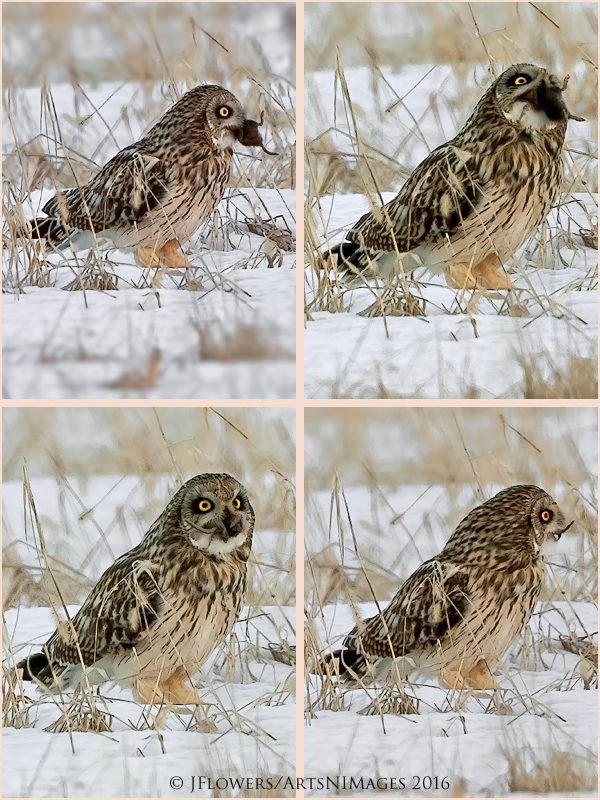 There still are substantial areas of grasslands available,  but for how long is anyone’s guess! The same is happening to the Gettysburg Battlefield National Park.  Just a couple of years back the park contained huge expanses of grasslands,  especially along Business Route US 15.  For visitors to the park with an eye for nature,  these fields always held a few short-eared owls as well as many raptors.  Meadowlarks and Bobolinks were also once abundant visitors.

These same fields today are now mostly farmland,  which the Historical Society wanted to bring the area back into the Civil War era.  However, I seriously doubt that today’s modern farm equipment and hybrid crops were used or planted during that period of our history!  I’m also willing to guess that most visitors to the park would much rather see a rich natural environment with flora and fauna instead of commercial modern-day farming of which they can see on any highway across America. 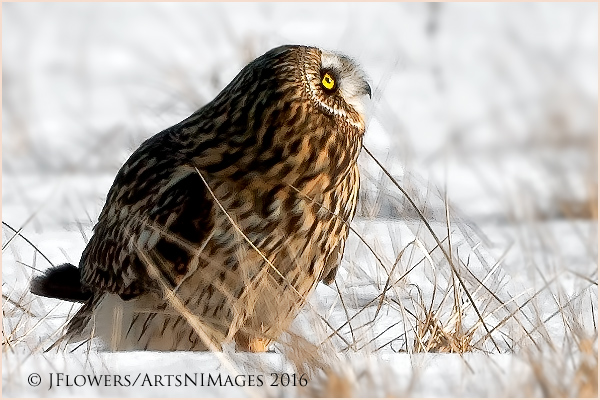 There are several other locations to look for the short- ear,  and where I have observed them in the past not too far from my home here in south-central Pennsylvania.  Just above the Mason Dixon Line,  and just above the town of Stewartstown, lies a reclaimed landfill planted in native grasses called the Hopewell Township Recreation Area.  The area will occasionally host the Short- eared Owl as well as other grassland raptors and songbirds. Map via Google.

There are a series of trails that traverse the property and two nice viewing platforms have been added,  one at the parking lot and the other mid-field. The area has become very popular with dog walkers and I’m not sure as to the impact on the wildlife. 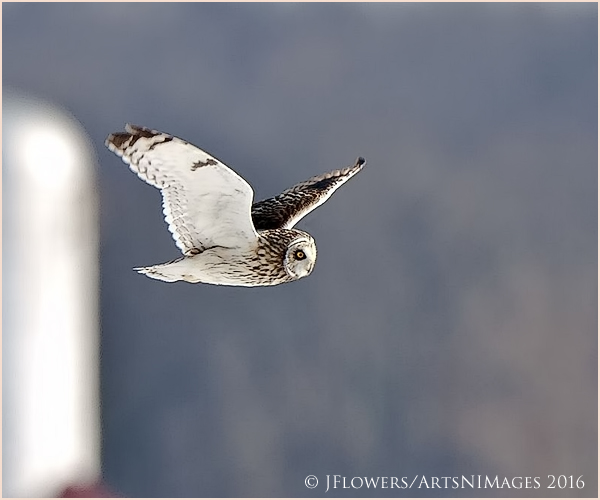 Another notable location to find the short-eared owl,  is the Middle Creek Wildlife Management Area,  sharing acreage in both Lancaster and Lebanon Counties, Pennsylvania. Middle Creek is most frequently visited by waterfowl enthusiasts,  especially in early March for its amazing population of migrating snow geese,  but also holds a nice population of raptors and various owl species that patrol its surrounding grasslands.  The owls are most prevalent along Kleinfeltersville Road,  north of the Visitors Center through the rolling uplands. This is really the only access to the area during the winter months until the first of March when the tour road opens. Map via Google.. 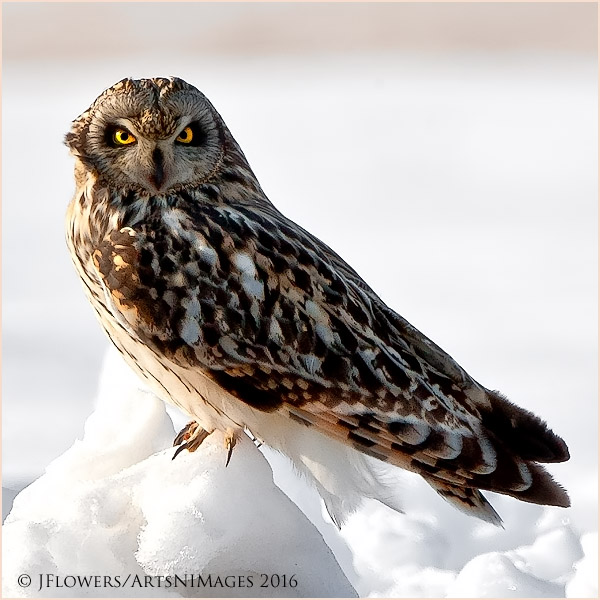 As I have previously mentioned,  wide – open grasslands and wetlands compose the primary winter habitat for the Short – eared Owl.  Traveling eastward to the coastal plains and marshes of Maryland and Delaware,  present numerous opportunities to find this owl;  in fact almost too many to mention.  However,  I will list a few of my favorites. 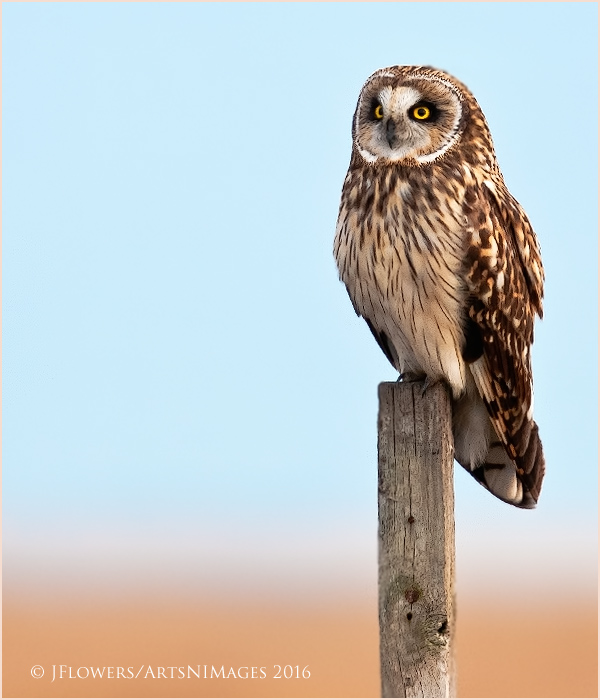 Larry’s beloved “Lower – Slower” Dorchester County in Maryland was my introduction to this owl species and still remains productive year after year. The Chesapeake Bay,  Blackwater, Choptank and Nanticoke River wetlands are prime locations.  Public lands like the Blackwater National Wildlife Refuge (Map via Google) and the Fishing Bay Wildlife Management Area (Map via Google) provide plenty of access.  The thing to remember about this area,  is to find a “back-road” to explore during the late afternoon hours until sunset/dusk and keep an eye out for hunting owls. 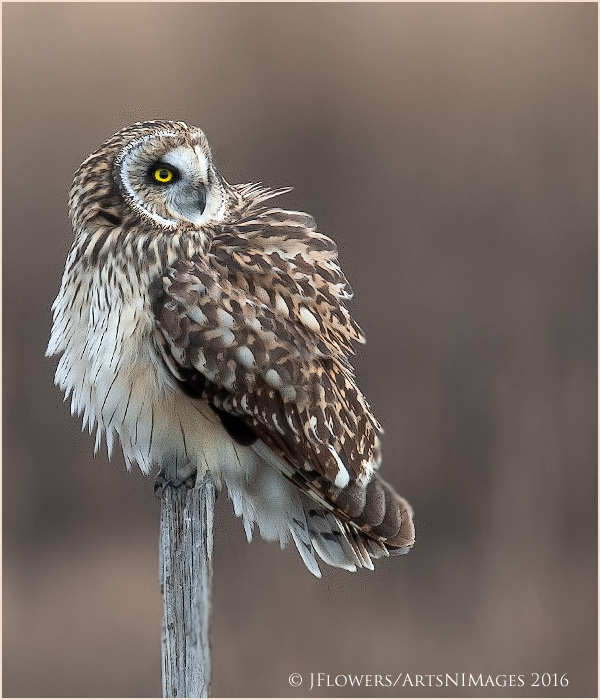 Traveling farther south via US Route 50 to Salisbury and then US Route 13 towards Virginia and the town of Princess Anne,  the Deal Island Wildlife Management Area (Map via Google) offers back-road access to a vast wetland complex and notable sightings of the short-eared owl.  This area is also very productive for wintering waterfowl.  Again, I want to stress you doing a little research via the birding reports and eBird.  You never quite know when one will be reported.

I have observed this owl species at the Bombay Hook refuge on quite a few occasions during both the early morning and late evening hours flying out over the Delaware Bay marshes, adjacent to both the Shearness and Bear Swamp Pools.  Most visitors have their eyes glued to the fauna occupying the fresh-water impoundments at the refuge and pay little attention to the open marshes to the east along the bay and miss the spectacle.  So, on your next early or late visit,  you just might want to make a little extra effort to be observant to the marsh.

Just a few miles to the north of the Bombay Hook refuge is the Woodland Beach Wildlife Management Area (Map via Google) and I have observed a short-ear patrolling the marsh from the observation tower a few years back so this might be a good spot to check out as well. 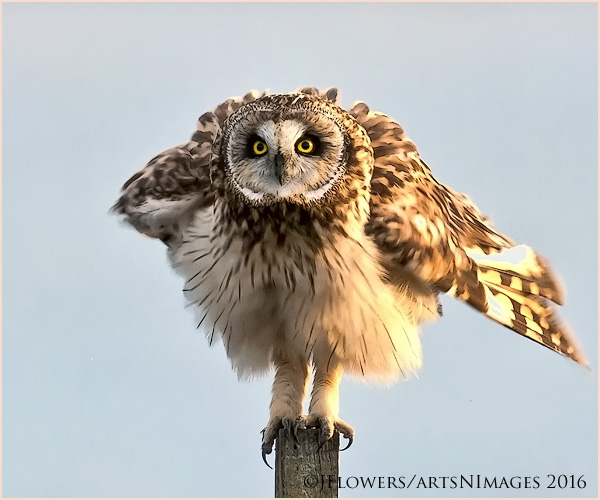 A Fishing Bay short-ear lands on a Trappers Mark

Traveling south from Bombay Hook along DE Route 9,  you come to the town of Little Creek and Port Mahon Road,  (Map via Google) which is a very popular route for those with an interest in shore-birds.  This road is also very well known for wintering short-eared owls and sightings are reported on a yearly basis.  Just be very careful when traveling this road as only half is paved and the rest is sand,  shell and rocky rip-rap.  You can easily damage tires if not paying attention to your route of travel.  A favorite spot of mine to watch for the owls is from the elevated steps of the fishing pier.

A bit farther south of Port Mahon Road lies the Ted Harvey Conservation/Wildlife Management Area (Map via Google) and the Logan Tract of the Little Creek Wildlife Area at the end of DE Route 9, via Kitts Hummock Road;  and then continuing south along DE Route 1, Bowers Beach Road contains favorable habitat near it’s end and the Delaware Bay. 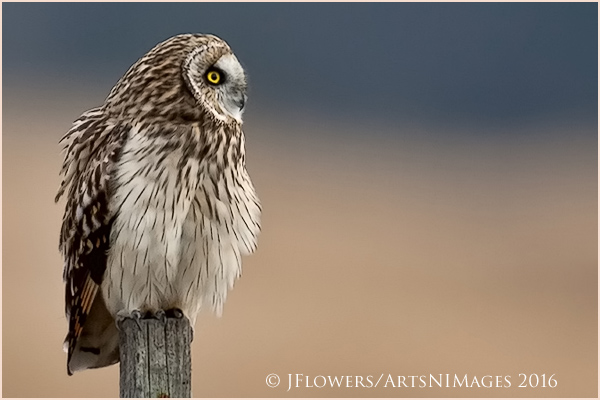 Then finally,  Broadkill Road,  (Map via Google) ending at Broadkill Beach through the Prime Hook National Wildlife Refuge also contains suitable habitat and is certainly worth taking a gander…

Hopefully, all of the above areas mentioned will give ‘owling” fans a bit of reference and a few starting points to begin their adventures. Finding these birds is “game of chance” on most occasions, but can be a lot of fun and the rewards when successful are by far worth the effort..

10 comments on “The Short-eared Owl – Wetlands, Grasslands and Raptors Part 3”