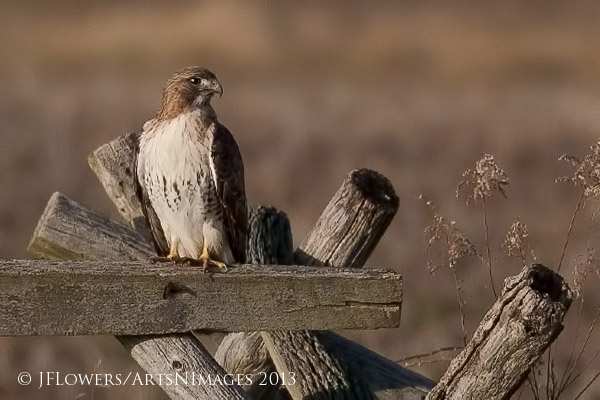 My friend and fellow photographer,  Eric Gerber once again returned the following weekend and we planned to re-trace our tracks from the previous weekend adventure beginning at the Union Mills Wetlands in northern Carroll County Maryland and then following the back roads to the Mason Dixon line and northward to the Freedom Township Grasslands and the Gettysburg National Battlefield.  Besides our quest for raptors and other bird life,  Eric invited me to try out a used Canon 600mm lens he had purchased in the recent past and I was of course happily obliging to accept his offer.  I was interested in seeing how this older generation film lens would perform with today’s modern digital media.

The lens, a Canon EF 600mm f4,  non IS (Image Stabilization) was manufactured back in 1994 and was in mint condition.  Just the cosmetics alone were flawless and the lens looked “brand new”.  The optics were also clean without any flaws or imperfections.  “Wow” did he get a “deal” on this thing.  I partnered the lens with my Canon 1.4X teleconverter to increase the focal length to a whopping 840mm for outstanding reach and matched it to my Canon EOS 5D, full frame digital camera body.  I found this lens breathtakingly sharp, even with the teleconverter attached.  My only “nit-picks” of the optics were a noticeable bump in contrast and the lack of the improved coatings of the newer Canon optics.  However, with slight adjustments to the camera settings, it did the job just dandy!

Our morning would again start with the Union Mills Wetlands to look for raptors that reside in this location. I found the Coopers Hawk youngster perched in the woodland edge (pictured left) and giving me an “over the shoulder” pose to photograph. Again our presence seemed not to disturb him. I have seen this bird numerous times during the last few weeks and he or she looks to be a permanent resident.  I was particularly looking for a Northern Goshawk that I had observed in the area a few days back. The bird launched off the ground, hovered a short moment and then made a hasty retreat to the south over some pines and out of view. I would love to have an opportunity to photograph this species.

The two Red-tails were missing as well from my previous exploration, but I did notice another bird in the distance, perched in the leafless hardwoods that border the wetland. It looked to be more mature than the other two mentioned.  Notable other birds observed in the area were a flock of Eastern Bluebirds and various species of sparrows in the brushy areas.  I’m really looking forward to the spring migration to see what I can discover in this area.

We would continue retracing our route from the past weekend by exiting the wetlands and then traveling down east Mayberry Road to Babylon road, a narrow dirt affair that travels though a nice grassland habitat and private upland hunting area.  We observed three more Red-tails and I had seen a Sharpie the day before.  The grasslands here are full of sparrows too.  I had found a Great Horned family several miles above the grassland area near the Mason Dixon line the week before but didn’t take any pictures, so we set up and waited a while hoping they might appear.  After a few minutes,  the male made an appearance for a very short period and then flew back into the thicker pines.  He had been calling on a regular basis throughout the week before. 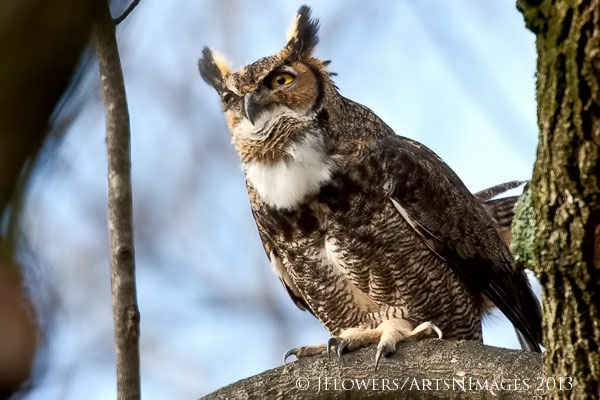 We decided to continue north into Pennsylvania and on to the Freedom Township Grasslands before concluding our day at the Battlefield in Gettysburg.  We were hoping to get some better shots of the Ring-necked Pheasants with the lovely sunlight available.

The majority of Carroll County Maryland and the lower and eastern portions of Adams County are a hodge-podge of farmlands, woodlands, grasslands and gentle rolling hills with the foothills of Blue Ridge chain and the Michaux State Forest to the west.  It is a haven for wintering raptors that include Red-tailed Hawks, Red Shouldered Hawks, Coopers Hawks,  Sharp-shinned Hawks, American Kestrels,  Northern Harriers,  Bald Eagles and an occasional Rough-legged Hawk.  Traveling the area can be dedicated to the “back roads” with little traffic.  Opportunities for photography abound and the birding is excellent.

We arrived at the Freedom Township Grasslands about 1:30 PM and began traversing some of the roads that criss-cross the area.  We located the Pheasants out in the open in the brilliant light just where we expected to find them.  I observed their direction of travel and found a place to park behind some brush to wait for their approach.  Eric and I both took a nice collection of photographs of them.  Below are just a few of my favorites. 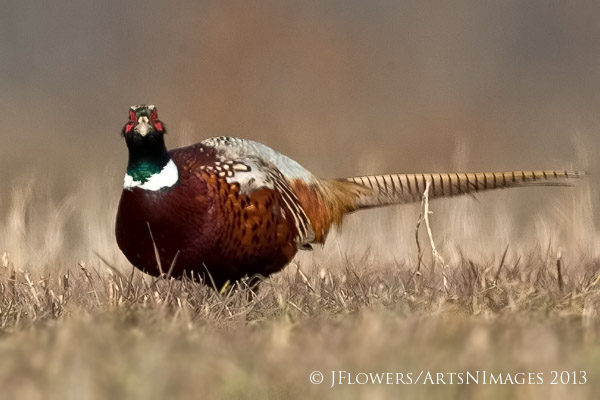 I did not see the Rough-legged Hawk from the week before, but had been told by a landowner and friend that he or she was still very much around.  We also looked for the Loggerhead Shrike that I had observed a few weeks back and stopped by the Sachs Covered Bridge to try to find the White-winged Crossbills that had been recently reported on the PA bird list-serve earlier in the week.  We scored a zero on both.  I’m not so sure about some of these birding reports sometimes.  At least I never seem to find what has been reported on many occasions.  But then sometimes I do!!!  We did catch a glimpse of a Barred owl flying through the woods with crows in chase along Marsh Creek.  The Bald Eagle pair was tending the nest along Red Rock Road as well along with several Red-headed and a Pileated woodpecker in the nearby hardwoods.

The plan for the remainder of the day was to explore the Battlefield for more hawks and then park along old route 15,  hike out to a good location, and wait for the dusk short-eared owl flight that had also been reported by PA birders.  The Red-tailed Hawks were out in force in the Battlefield.  We even got to meet a very cordial Park Ranger who stopped to remind us to pull farther off the road when stopping to photograph the birds.  We must have chatted with this fellow for twenty minutes or better about birds, cameras and the Battle of Gettysburg.  He was a “breath of fresh air” as is most of the park staff.  The “title” image above and the remainder of the images below are all from the Battlefield. 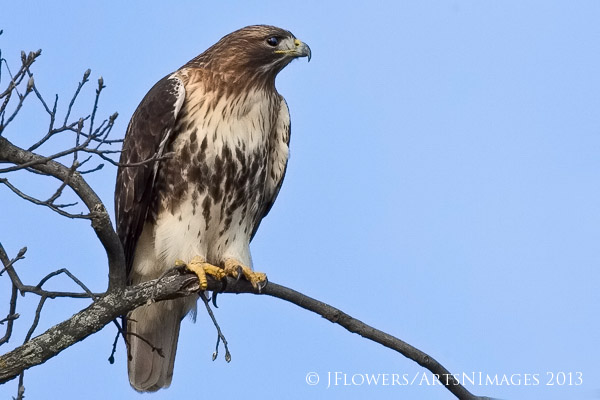 We finally made the hike out into the grasslands along an old fence-line and set up for the owls that “as luck would have it”, made their appearance well after dusk when photography would have been futile. But we did get to see them.